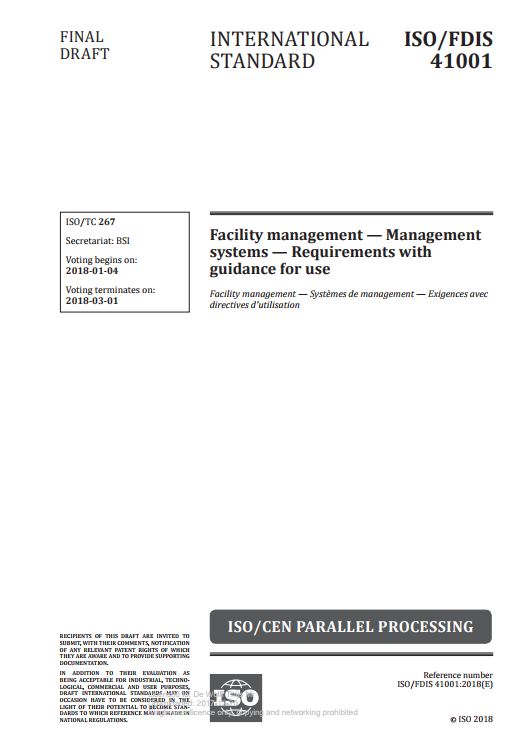 Why will ISO41001 become THE European FM-standard?

It has been almost two year since my first encounter with the new international ISO standards for Facility Management. The Dutch national standards body (NEN) had asked me to participate in the Melbourne meeting of ISO/TC267 Facility Management, the technical committee responsible for the ISO41000-series FM standards. During this meeting I was introduced to ISO41001 FM Management System Standard for the first time.

Back in the Netherlands I had many talks with FM professionals about these development. During these conversations it was often stated that Dutch FM’s are already far advanced in FM. As a result, the necessity and usability of the new FM management system standard was openly doubted.

Do we really need this new standard?

Although this reaction might seem logical to some, it was not relevant. As a result of prior international agreements this new FM standard will automatically be introduced as the Dutch NEN-ISO41001 standard in 2018.
So if we envision (dis)advantages or not, as FM professionals we will be subjected to this standard. As such it is expected of us to explore the scope and contents in order to be able to give our employers a professional advice in regard to the possible adoption of this standard in our organisations.

Which international agreements have been made and how will these result in ISO41001 becoming the  FM-standard in Europe and our home-countries?

European EN-standards are published by CEN-CENELEC. Within Europe it has been agreed upon that EN-standards will automatically be adopted by CEN member states, including the Netherlands. As a result, remaining conflicting national standards will have to be withdrawn after a EN-standard has been published. .

All standards that are developed under the Vienna Agreement will automatically be adopted and subsequently published als European EN-standards. As mentioned before, these new EN-standards will have to be adopted by the CEN member countries.

The ISO41000-series of FM standards are developed under the Vienna Agreement (ISO/CEN parallel processing; see figure), which means that all ISO FM-standards that will ensue, including ISO41001, will in the end be published as national FM standards in European countries. In the Netherlands NEN-ISO41001 will be published later this year.

This blog was originally posted on www.vanderpool.eu, 19 January 2018